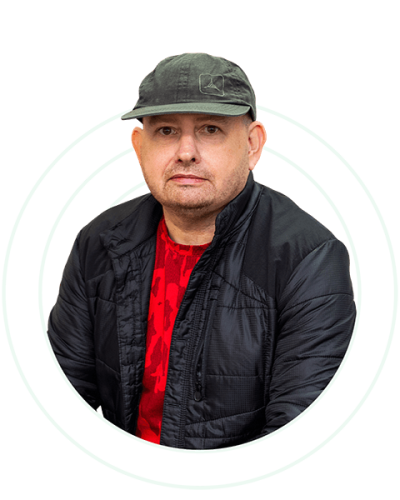 Mark left the NHS in December 2020 to join Infotex with Jono and Gareth. He specialises in Business Requirements of customers, turning business rules into software business logic. As our Director for Business Systems, he advocates using the most up-to-date technologies and keeping things cutting edge. He loves learning, especially the latest Microsoft.NET technologies, but also software methods and best practices.

Mark has been programming computers since he was just 10! (the first time he saw a computer he wanted to learn how it worked, and how to make it do what he wanted).

From 1990 until 2018, Mark worked for Delphi, building his way up to Senior Engineer. This job involved a variety of roles such as sourcing machinery for new product development, helping manage a £50m+ a year budget, helping design and create manufacturing facilities for the new products, building machines with the New Engineering Research and Development Services team – or NERDS for short), and working with software systems including Automation, Robotics, Safety systems, and User interfaces. Following that, Mark joined the NHS as a Senior Software Developer in 2018 where he met Jono and Gareth.

When asked what things he loves, Mark is pretty confident about one thing: beer! Drinking beer, cooking, listening to music, BBQing, all while drinking beer, going to the pub, for beer… you get the idea. He also really loves doing things with his amazing kids and girlfriend and spending time with family, travelling, inspiring and helping people where he can, and the simple things: a radio, an open fire, and a book is his idea of heaven. He also really loves every moment of his work.

Saying he’d rather be interviewed that interview, we can see why: Mark has some insightful lessons that he lives by and that we can all take advice from. Hope for the best but prepare for the worst; never let a mistake or failure go to waste; and know and accept yourself for who you are – “A man’s got to know his limitations”! (Clint Eastwood).

Retirement plans are good ways to get to know someone a little bit… Well, Mark’s dream is to move to Alaska, live in a shack, sit on the porch with a glass of whisky, and look at the mountains. Pretty dreamy. Or, more suited to his partner, who comes from the Phillipines, a remote paradise island on the edge of the Pacific. Two good options, don’t you think?